A letter is a written message that can be handwritten or printed on paper. It is usually sent to the recipient via post in an envelope, although this is not a requirement as such. Any such message that is transferred via post is a letter, a written conversation between two person or more.

At first you take my love. I hope you are well. I am also well. You have wanted to know about the prize giving ceremony our school. Now I am giving you a short description about it.

The day of prize giving ceremony was a day of joy for all the students of our school. The function started at 4 p.m. on Monday last. We decorated our school campus nicely with coloured paper. In the function, the T.N.O was the chief guest. The Headmaster of the school read out the annual report of the school. After the reports the winners were given prizes by the chief guest. I also got a prize for good result in the examination. After the speech of chief guest the Headmaster made a concluding speech. Then the programme came to an end. I enjoyed the programme so much that the memory of the programme will remain ever fresh in my heart.

No more today. More when we shall meet. Convey my best regards to your parents and love for the youngers. 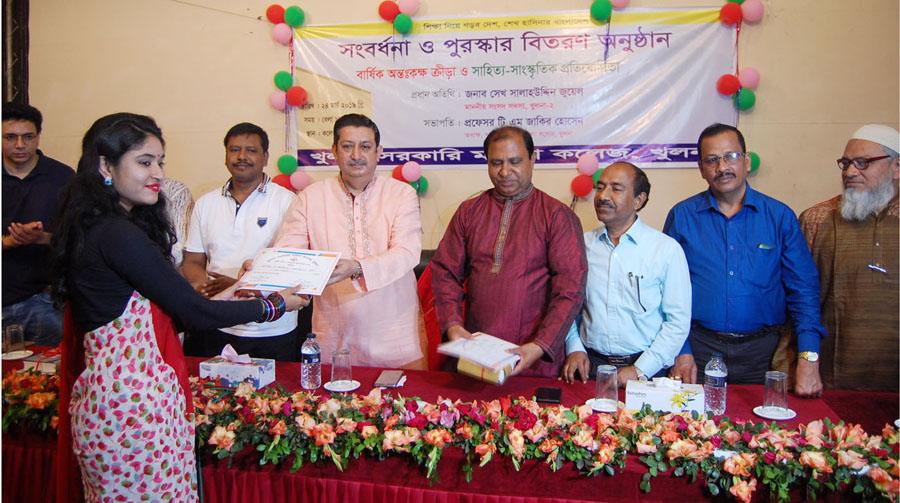 This afternoon was a fine time for me. And it was the prize-giving ceremony of our school that gave me the pleasure. Now I tell you of this.

You know that the prize-giving ceremony held at our school every year is a pleasing one. And this year’s arrangement was no exception to it. The Thana Nirbahi Officer agreed to adorn the chair of the Chief Guest. Our Headmaster presided over the meeting. Important persons of the locality were invited. There was a committee for conducting the, whole activities. The stage as well as the entire auditorium was decorated well.

The function was to begin at 4 p. m. The Chief Guest came in time and took his chair. The Headmaster took chair also. First there were recitations from the. Holy Quran and the Holy Gita. Then, in honour of the Chief guest, a few singers sang some Rabindrashangits and Nazrulgitis. Then the prize-giving began. The. Chief-Guest delivered prizes to the winners and shook hands with them. At the same time the entire hall became ecstatic with the pandemonium of the applause by the audience.

The prize-giving phase over, the Chief-Guest delivered his valuable speech to the winners as well as all the participants. Then the president delivered his speech and declared the end of the function. No more today. Wishing you best of luck,

House No. 6. Road No. 7A Chattagram R/A, Chattagram

How are you? I received your interesting letter yesterday. In the letter, you have wanted. to know about the prize-giving ceremony of our school. So I am writing you about it.

The annual prize-giving ceremony of our school was held last week in the school compound. We decorated our school buildings with colored paper, leaves, and flowers. Our ex-headmaster presided over the meeting.

The function began at 3 p.m. After the recitation of the Holy Quran, our headmaster read out the annual report. Then our game teacher called the prize-winners one by one and the president gave away the prizes. I got two prizes. When the formal meeting was over, we staged a short drama. It was highly appreciated by the audience. This being over, the president made a short but valuable speech.

No more today. I hope you are in sound health. With best regards to your parents and love to the youngers.

If you have any question about Write A Prize Giving Ceremony Letter To Your Friend then comment bellow or message us through our facebook Page. We will reply as soon as possible.